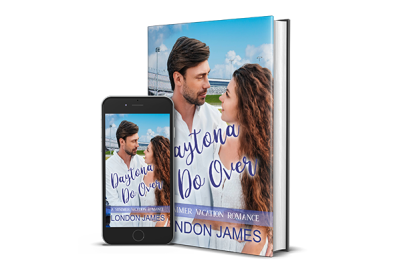 Book One ~ A Summer Vacation Romance

Lexi Carter was sure of two things. One, she loved her boyfriend, Shane, and two, although she planned an elaborate trip to see the Coke Zero 400, she knew nothing about cars. Nothing. After she catches Shane sneaking off with another woman, Lexi now has two choices—go on this expensive, already-paid-for trip or be out thousands of dollars. Not wanting to waste money, and figuring she can just skip the race, Lexi packs her bags and heads off to sunny Daytona, Florida and her fabulous, rented beach house.

Race car driver Max Stone had one thing on his mind—the NASCAR Championship Series at the end of the year. He had all the qualifying points needed, several wins under his belt, and was in the prime of his career. At least he was until the association found tainted gas in his race car after the Daytona 500. His crew chief isn’t talking and although he knew nothing of the gas, Max is facing a horrible scandal and one that could end his season. To hide away from the press, he flees his home to hide out in a rented beach house in Daytona while he awaits his trial.

When the pair find out that the travel agent double booked their private beach house, they must either spend their vacations together under one roof or find other accommodations. With the race coming up, however, any available rooms are lackluster at best. Can they make the most of an awkward situation? And will Max get the okay to race again before it’s too late?